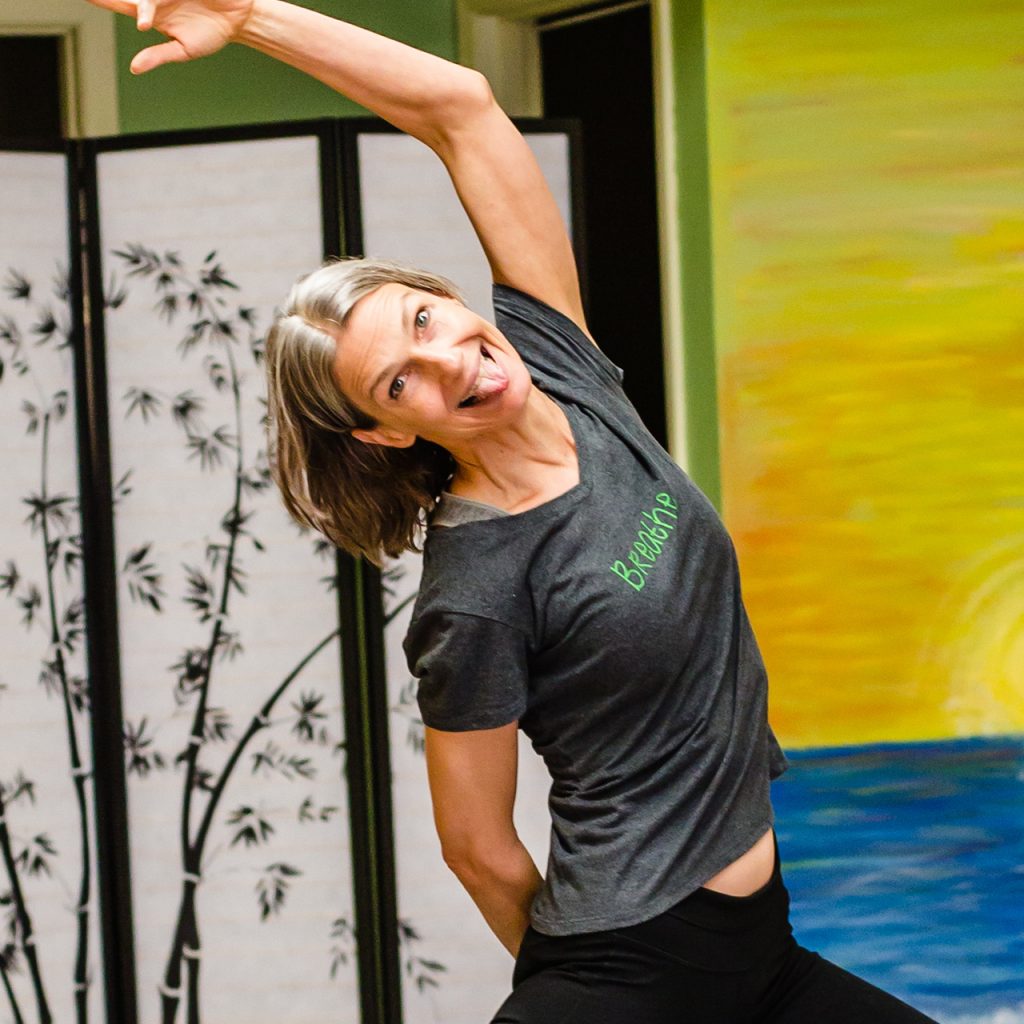 That’s the gentle command that will greet you upon approaching the bright little yoga studio on Greenfield Avenue. Susie herself will then materialize, smiling to welcome you in all her barefoot glory.

Yoga is Served is everything a yoga studio should be – inviting, relaxing. Ribbons of smoke dance from an incense burner that smells of lavender and cloves. Artwork created by local artists, including a two-wall mural painted by artist Ronnie Schmauz and photography by Susie’s boyfriend, Jason, decorate the space, inspiring one to move and be moved.

She keeps looking at “his spot” when we sit down for her interview. After all, it’s Jason she credits for getting her into yoga four years ago when he suggested they try couples yoga.

“Something happened,” Susie says of that first experience. “My very anxious mind quieted and I was hooked.”

In a previous life, anxiety was something that had control over Susie’s life. But not so much anymore. “Yoga helped me center,” she says, “to quiet, and to let some of that go.” She smiles, a soft, knowing smile. “As you can see, it’s a continual process.”

In the Spirit of Giving

Susie’s devoted much of her life now to learning and teaching the science of yoga and healthy living to anyone who walks through her door. And she truly means anyone. Attending her classes is donation-based, so her pupils offer what they can afford. She describes the culture of her yoga studio as having a deep sense of community. Some people pay a dollar and some people pay twenty, making up for the ones who can’t afford as much. “I’ve had coins in there,” she says.”That’s ok.”

Having only been open since June 2018, word about Yoga Is Served is quickly spreading. “They have my back,” Susie says of the supportive West Allis community.

Her 30 Days of Yoga program helped get the word out about her business. For the past three summers, she’s taught free yoga classes outside the Franklin Fieldhouse. There is no monetary obligation to join her classes, but, Susie chooses one local organization or charity each day to award 100% of the day’s proceeds. Organizations she’s supported include the West Allis Senior Center, the West Allis Special Olympics, Hunger Task Force, and many more.

In addition to an encouraging community, city officials were instrumental in the seamless process of opening Yoga Is Served. “Everything went so smoothly,” Susie says. “Everyone was cheering for this place from the get-go.” In fact, some city personnel attend her classes!

A Journey to Brighter Days

People are starting to filter in for the daily 9a.m. class. Susie greets them individually by name and waves. She places her hand over her heart then, as though touched to see that people have come, just as they did yesterday and as they will tomorrow. Seeing one woman in particular brings tears to her eyes. “Anne is sixty-six and walks two miles to get here. You guys want a story – they’re the story.”

Susie describes Yoga Is Served as more than a business. It’s her life, her heart, and her journey. She is hopeful that the city’s revitalization will bring more businesses for her to partner with – and a vegan restaurant!

Great things are in store for the City of West Allis as it continues its rejuvenation and explores new horizons, just as Susie did four years ago. With the support of the community and Susie’s positive vibes, the future looks bright indeed.