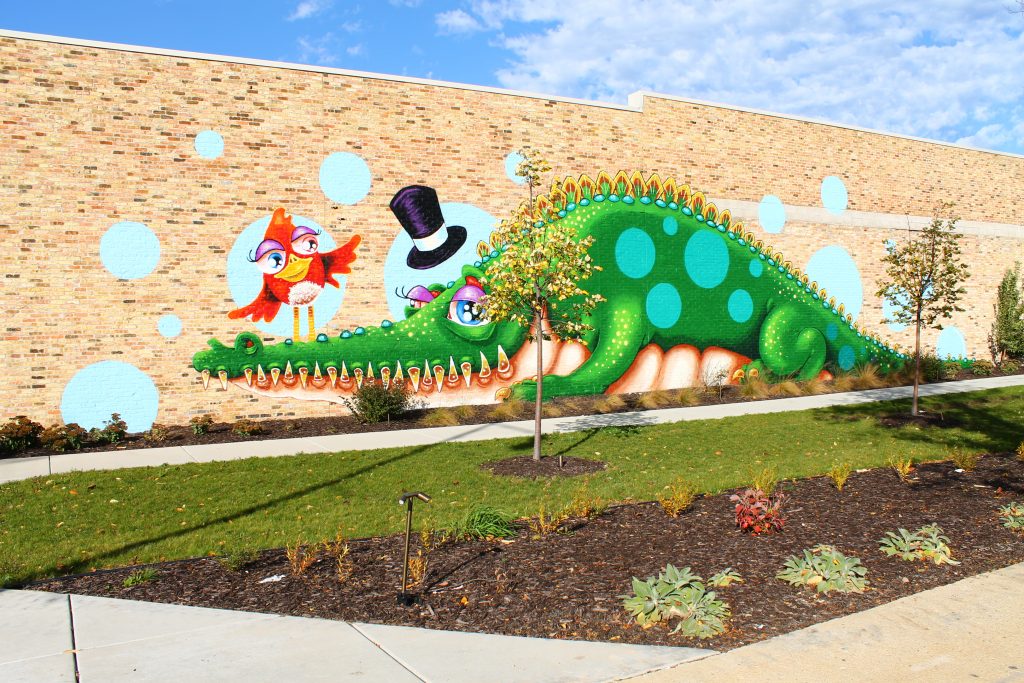 The City of West Allis has been fortunate enough to work with some incredibly brilliant artists and we want to show off just how vibrant our community has become because of their talent. We have put together a Self-Guided Mural Tour brochure for you to take along on your next excursion, available at City Hall. We also have a Google Map with mural locations so you can plan out your self-guided tour before you arrive in town.

The City of West Allis Artscape Committee provides grants to local businesses so artists can transform walls in West Allis into works of art. On the self-guided mural tour, you will come across several of these beautiful Artscape Projects.

Description: This amazing astronaut was painted by Fred Kaems in 2017 for the Peanut Butter & Jelly Deli. The astronaut reaches for a glass of weightless milk in space. This mural proved to be so popular that it was one of the factors that inspired the Artscape Committee in West Allis to pursue the West Allis Living Streets Project in 2020.  Fred Kaems is a multi-disciplinary artist from Milwaukee, Wisconsin. He works as a painter, muralist, designer, and maker. His work as a designer focuses on sleek modern objects that are often made for a specific function. This part of his practice relies heavily on cutting edge software and technology, balanced with his practice as a painter and muralist which are largely self-taught. His work as a painter stems from his background as a graffiti artist in his youth. This influence shows with bold colors, hand cut stencils, and the forgotten spaces of man that nature has begun to retake. 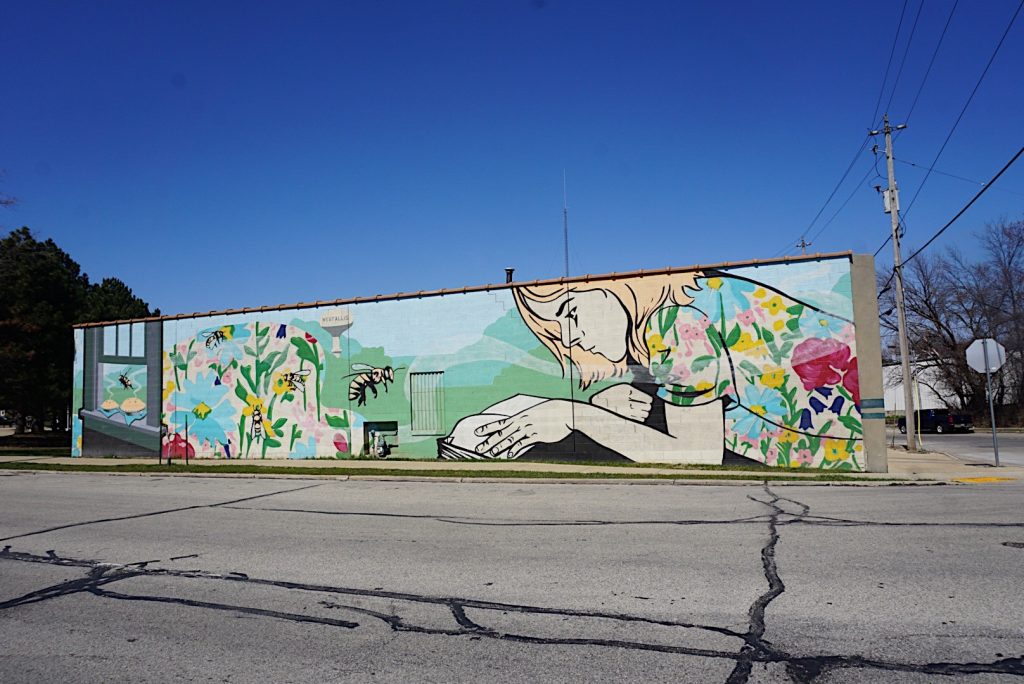 Description: In spring of 2016, Milwaukee-based artist Lindsay Marx installed “Bee in the City” at 83rd and National. The mural depicts a young girl reading a book, while pies cool on a windowsill and bees drift in a lazy summer scene. Marx said, “I wanted to honor the hometown sensibility and growth of West Allis. The design features nostalgia for homemade pies on windowsills, children reading and references honey bees, which are major pollinators for the crops we see at our tables. These ideas, tied together with bold colors and unique shapes, enliven this segment of West National Avenue and certainly offer a worthy reason to visit this growing city.” Not only are bees vital pollinators, the mural’s proximity to Honey Creek Park is also a nod to the park’s history. Honey Creek Park earned its name due to the abundance of beehives dripping with honey that settlers discovered around the thusly named Honey Creek which flowed through the park until the 1930s. 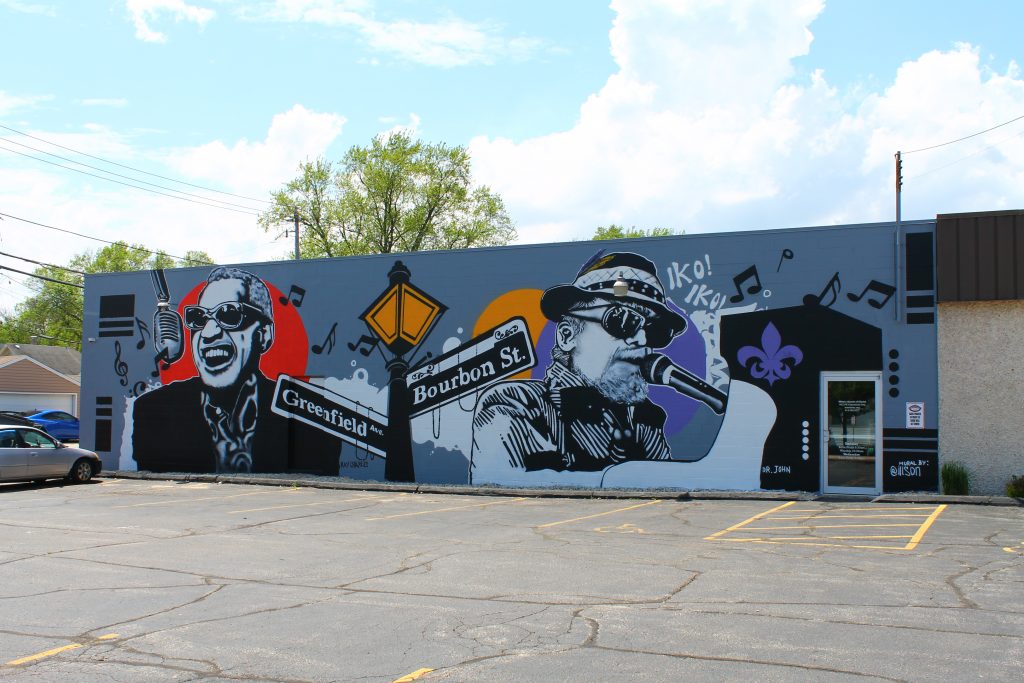 Description: The east-facing wall of Crawdaddy’s on Greenfield boasts a huge, colorful mural featuring depictions of musicians Ray Charles and Dr. John. The 20-by-70-foot painting, completed by artist Michael Ortiz of Denver, debuted in spring of 2020.  The painting, done in shades of blue-gray and black with accents of blue, yellow and red, features Ray Charles on the left and Dr. John on the right. Between them is a streetlamp with “Greenfield Ave.” and “Bourbon St.” signs. The painting also boasts musical notes, a fleur-de-lis and “Iko Iko,” the famous Mardi Gras tune covered by Dr. John.

These concrete benches are shaped like big, open books and were painted by local artists. Library staff brainstormed a list of potential themes for each bench and voted to select the themes that would guide each artist. The themes and artists were:

In 2020, four new artworks were installed at various sites around the commercial corridor of West Allis, sponsored by the City’s Artscape Committee. The WALS project was led by Wallpapered City, the artist-led working group that implemented the “North Avenue Mural Arts District” (NoMAD) in Wauwatosa, Black Cat Alley, Bay View Street Canvas, and other public and commercial art projects in the Milwaukee area. 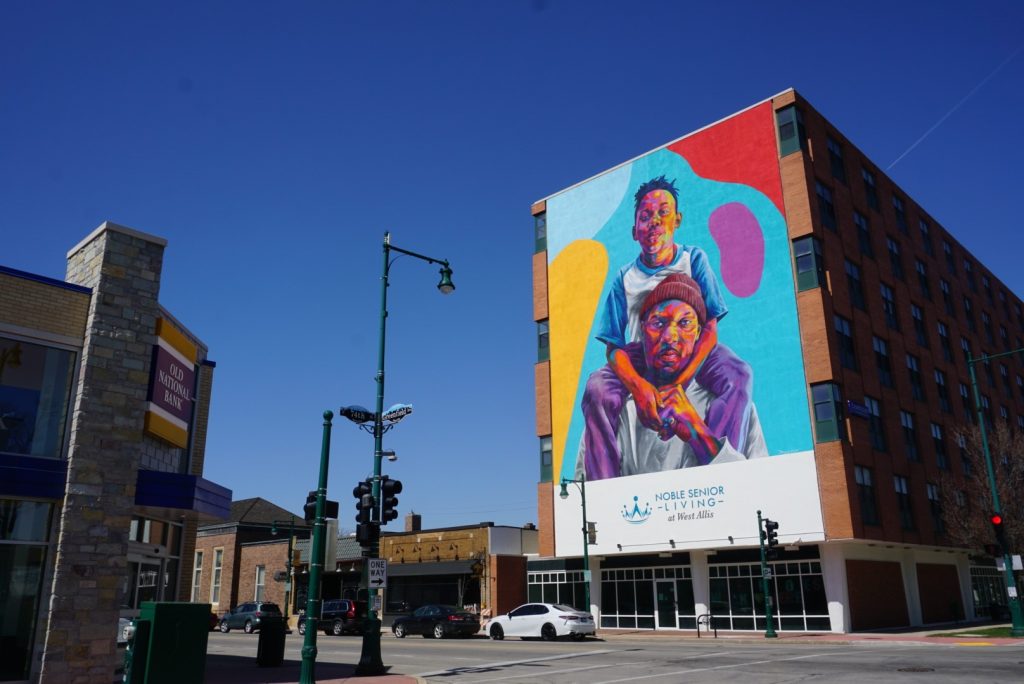 Artist: Thomas Evans, aka Detour
Location: Lamplight Building, 7400 W. Greenfield Ave
Description: Detour is an all-around creative specializing in large scale public art, interactive visuals, portraiture, immersive spaces, and creative directing. His focus is creating work where art and innovation meet. A born collaborator and “military brat,” Detour pulls from every conceivable experience that shapes his landscapes and perspectives. Explaining Detour’s work is no easy task, as ongoing experimentations in visual art, music, and interactive technologies have his practice continually expanding. With his ever-evolving approach to art, Detour’s focus is on expanding customary views of creativity and challenging fine-art paradigms by mixing traditional mediums with new approaches—all the while opening the creative process from that of a singular artist, to one that thrives on multi-layered collaboration and viewer participation.   Detour’s West Allis mural is five stories tall on the Lamplight Inn building. The mural was inspired by a picture of one of his friends, John Chapman, and Chapman’s son, Britton.   Detour hopes people will relate to the piece through their own happy memories with loved ones.  “It’s really like you’re passing it down to the next generation, you have on your shoulder, you’re carrying it on,” Detour said. “It’s (of) my friend, so it’s people that look like me and everything, so it’s sort of reflective of that representation, that’s really what I wanted to do.” 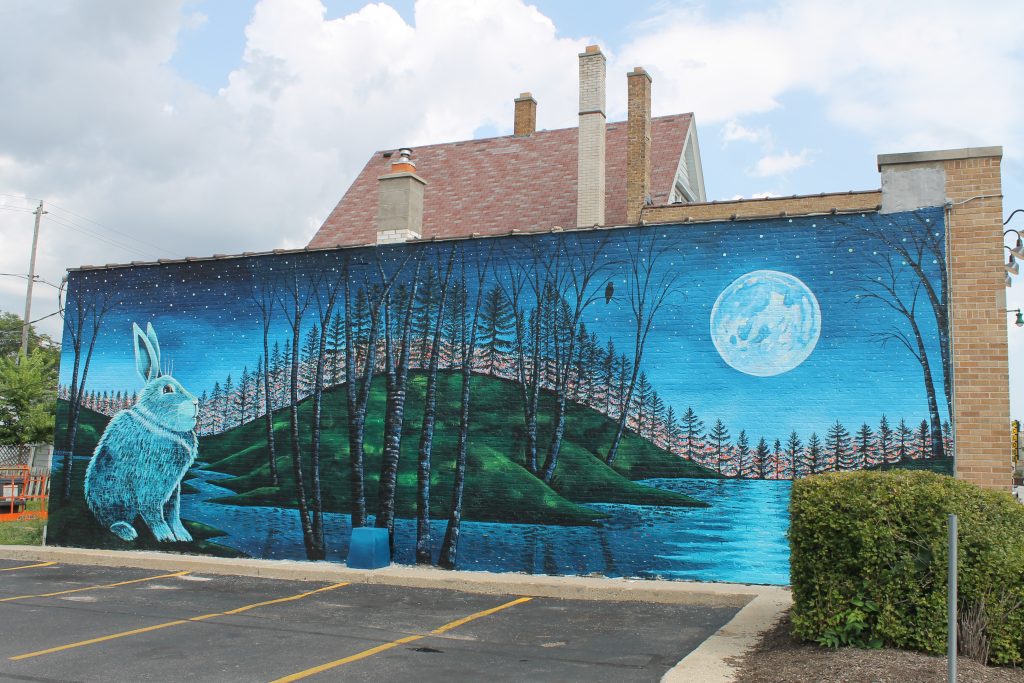 Location: The Gartzke Building, 7506 W. Greenfield Ave
Description: West Allis resident Dan Herro was chosen to paint “The Night Hare,” a beautiful scene featuring a white rabbit and rich night sky on the Gartzke building, 7506 W. Greenfield Ave. Inspired by the natural world, Herro creates scenes that bring a sense of wonder, a place to slow down and to rest. The Night Hare is a story about a rabbit and the full moon. As Herro explained, “While resting in the glow of the moon, the rabbit observes a silhouette resembling himself in the volcanic plains of the moon’s surface. This discovery brings about a realization that in some way, everything and everyone is connected.”  Herro currently serves as Head Designer and Preparator for the Haggerty Museum of Art at Marquette University. In 2019, he led the creation of the neighborhood mural at the Rainbow Gardens pavilion.

Location: Towne Center, 6900 W. Greenfield Ave
Description: Milwaukee artist David Mueller was selected to paint the Towne Centre shopping plaza’s south-facing wall. His quirky alligator mural, titled “Dile B for Birder,” brought a sense of fun and whimsy to the wall.   Mueller hopes viewers can look at the mural and understand that at times something ominous and scary has the potential to be welcoming and accessible. Mueller added, “The characters and situations we encounter in life may at first appear intimidating and unlikely, but they could end up being something attainable and symbiotic if we dropped some of our preconceptions.”

Artist: Jason Watts
Mural Name: Wonder Wheel
Location: The Reunion Restaurant, 6610 W. Greenfield Ave
Description: Watts describes his artistic style as “as a mashup of the iconography, symbols and local references that are part of our past and present.” His mural, “Wonder Wheel,” is intended to draw viewers into the kids running, with the central boy being the primary focal point of the composition. The boy is pointing to the right, where the Ferris wheel anchors the right side. The direction the boy points to is also that of the State Fair Park fairgrounds in the distance.  The larger intent of the painting comes from a recent series of paintings Watts completed titled “When we Ruled the World,” which references children at play. Watts noted, “Oblivious to any problems in the world, in current times, this aspect of normalcy is especially prescient. The kids come from all different backgrounds and are running together to a distant destination of fun.”